brought to you by

Just One More Day for Love, Hope & a Cure

A searchable blog on DIPG research, DIPG news, recent publications, DIPG Foundations, DIPG researchers, clinical trials as well as other issues relating to Diffuse Intrinsic Pontine Tumors- both Diffuse Intrinsic Pontine Gliomas (DIPGs) and Atypical Pontine Lesions (APLs).
For parents, family and friends of children with DIPG looking for information and connection to others dealing with DIPG please check the buttons on the right hand side for resources.

In August of 2005, a six year old girl named Alicia was very sick.  Alicia spent a lot of time traveling to doctor’s appointments for blood work, scans and other tests.  Alicia’s body was weak and when she got a simple cold it would make her so sick that she would need to go to the hospital.  When Alicia was admitted to the hospital she would go to her room and find a stuffed animal on her bed waiting for her.  Every time Alicia went to the hospital she would take her new stuffed animal and carefully choose who she would give it to.  She would never keep them for herself.   These animals made Alicia very happy.  She enjoyed seeing them waiting for her on her bed but she also loved giving her animal to another person. 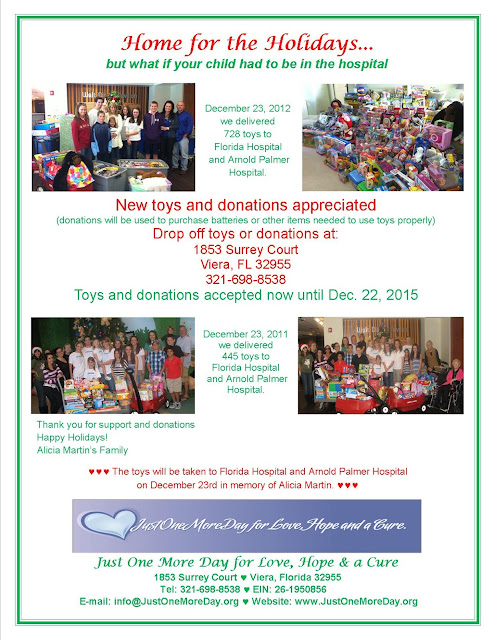 Posted by Christine at 12:41 PM No comments: Links to this post

is committed to providing information and support for families affected by diffuse intrinsic pontine glioma, promoting awareness, and funding research for a cure.

You can donate to Just One More Day with your PayPal account or any major credit card by clicking the "donate" button above.